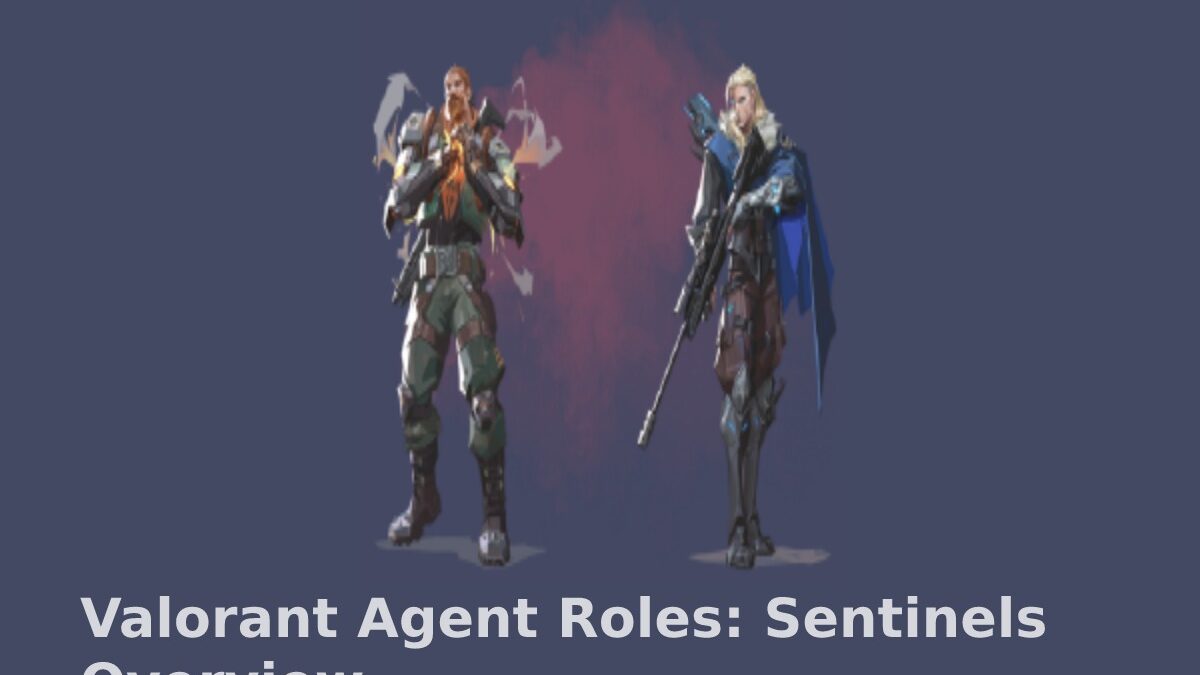 Valorant is the newest free-to-play hero first-person shooter, created by Riot Games. The game is multiplayer, covering two competing teams of five across several maps. Valorant takes place on Earth in the future, where agents, the playable characters, possess unnatural abilities brought about by advanced technology. While Valorant does not have an overarching story, there are four unique classes of agents, each with a different backstory.

In total, there are currently 15 playable characters, split through the Duelists, Controllers, Initiators, and Sentinel classes. This article covers the Sentinels class and its respective Valorant agents. We will discuss the unique qualities of Sentinels characters, explaining each agents’ abilities and uses.

The Valorant Sentinels role is one of the four types of agents available in the game. Sentinels are defense-heavy characters, who can take control of areas from enemies. These agents, built on defending points from opposing players, can support allies efficiently. This role tends to be used with defensive playstyles, either hanging back or laying traps to protect from enemy flanks.

Sentinels are extremely useful in team fights, as agents can secure flanks and support teammates. Many players believe this Valorant role is most useful during defense, but thanks to their abilities, this role is useful at any point within the game. Having a Sentinel on your team is almost always a must, as losing the power of a defensive expert can lead to major disadvantages for a team.

While the Sentinel role is heavily defensive, players can use utility to support attacks on enemies. The powerful abilities of Sentinels allow teammates to stay alive, with one Sentinel even having the ability to bring allies back to life. The support potential isn’t exclusively healing, however, as ensnaring and tracking allies is also more than possible with this Valorant role.

There are a total of three Sentinels currently available to play, representing a fifth of the total Valorant agent choices. The three, Cypher, Killjoy, and Sage, will have their unique abilities and uses explained below.

Cypher is an incredibly utility-heavy Valorant agent, designed around gathering information for his team while trapping enemies. None of his abilities deal damage to enemies, focusing exclusively on assisting teammates. Two of Cypher’s abilities daze enemies, either revealing their position and trapping them, or blocking their vision. His signature ability places a spycam which reveals and tracks enemies with a damage-less dart. Cypher’s ultimate reveals all enemy players’ locations when used on a recently killed enemy.

Cypher is the most effective agent for finding and tracking enemy players. His unique abilities alert him and his teammates to enemy positions, as well as distracting or disorienting them. Cypher is best used for utility players, as tracking players is essential for a good offense and defense.

Killjoy is unique among Sentinel agents, as she is the only Sentinel with damaging abilities. Her unique abilities among Sentinels make her a common choice for defensive players who still want abilities to attack enemies with. Two of Killjoy’s abilities have damaging potential, with an automatable nanoswarm grenade and an automatically firing turret. Her secondary basic ability deploys a robot that hunts and weakens enemies. Killjoy’s ultimate ability is one of the most useful in the game, launching an indestructible dome. This dome prevents enemies detained from shooting and using abilities for eight seconds.

She is commonly used as a combination between Cypher and Raze, as her playstyle utilizes a wide variety of abilities. Killjoy is incredibly useful for retaking difficult positions and containing enemies, thanks to her ultimate ability and auto turret. Both offensive and defensive players can utilize Killjoy’s abilities to their fullest, both capturing enemies and dealing moderate damage.

Sage is commonly used by high-utility playstyles, as she can heal herself and her teammates. That is on top of some of the most useful utility abilities, including her incredibly powerful ultimate. Sage’s two basic abilities create a solid wall or slowing zone. The wall fortifies after three seconds, expiring after a full thirty seconds. Her signature ability launches a healing orb, either healing allies or Sage herself. Sage’s ultimate resurrects an ally. This is commonly referred to as one of the most powerful abilities in the game, bringing an ally back into the game at full health.

Supporting playstyles shine through Sage thanks to her incredibly powerful abilities. While none of her abilities deals damage, Sage can make up for a lack of damage by keeping teammates alive. She can also use her three orbs to stop enemies and heal allies. Sage is most definitely a supporting character, as her resurrection ultimate is the shining star example of support abilities.

The Valorant Sentinels role is one of the most useful, thanks to the wide range of strict defense and adapting support. Each Sentinel is unique, and so every agent has their own unique purpose within a game. Cypher is most useful for gathering enemy information. His tracking and trapping abilities allow him to alert teammates as to where enemies are, allowing easier pushes. Killjoy is best used to retake heavily held positions within the map. Her damaging basic and signature abilities attack from a distance, while her ultimate contains enemies. Lastly, Sage is most useful in supporting the team. Her healing and protective abilities protect the team, while her coveted revival ultimate adds extra power.

Even with this overview of the Valorant Sentinels role, it is still quite tough to remember each agent’s use. It is even harder to learn when and where to use each agent during a game. That is why we recommend Boosting Ground, one of the top Valorant boosting services available. Boosting Ground offers professional services to help assist and support players towards achieving their Valorant goals. Whether it is helping win competitive games, boosting ranks, or winning placement matches, the service is incredibly helpful. It might seem tough to ask for help, but with Boosting Ground’s professional team, you will learn how to use each Sentinel character and grow your skills.

All About AWS Penetration Testing

Are you finding for a solution to the [pii_email_fb3a592541f578be054a] error? Here are some instructions that are likely to solve your problem.

How to select the Best Video Animation Maker for your Business

Double Authentication or Two-Factor Security – to Secure the Accounts of their Users, here’s how to Activate it.

Mir Baquer Ali, 10 months ago
How To