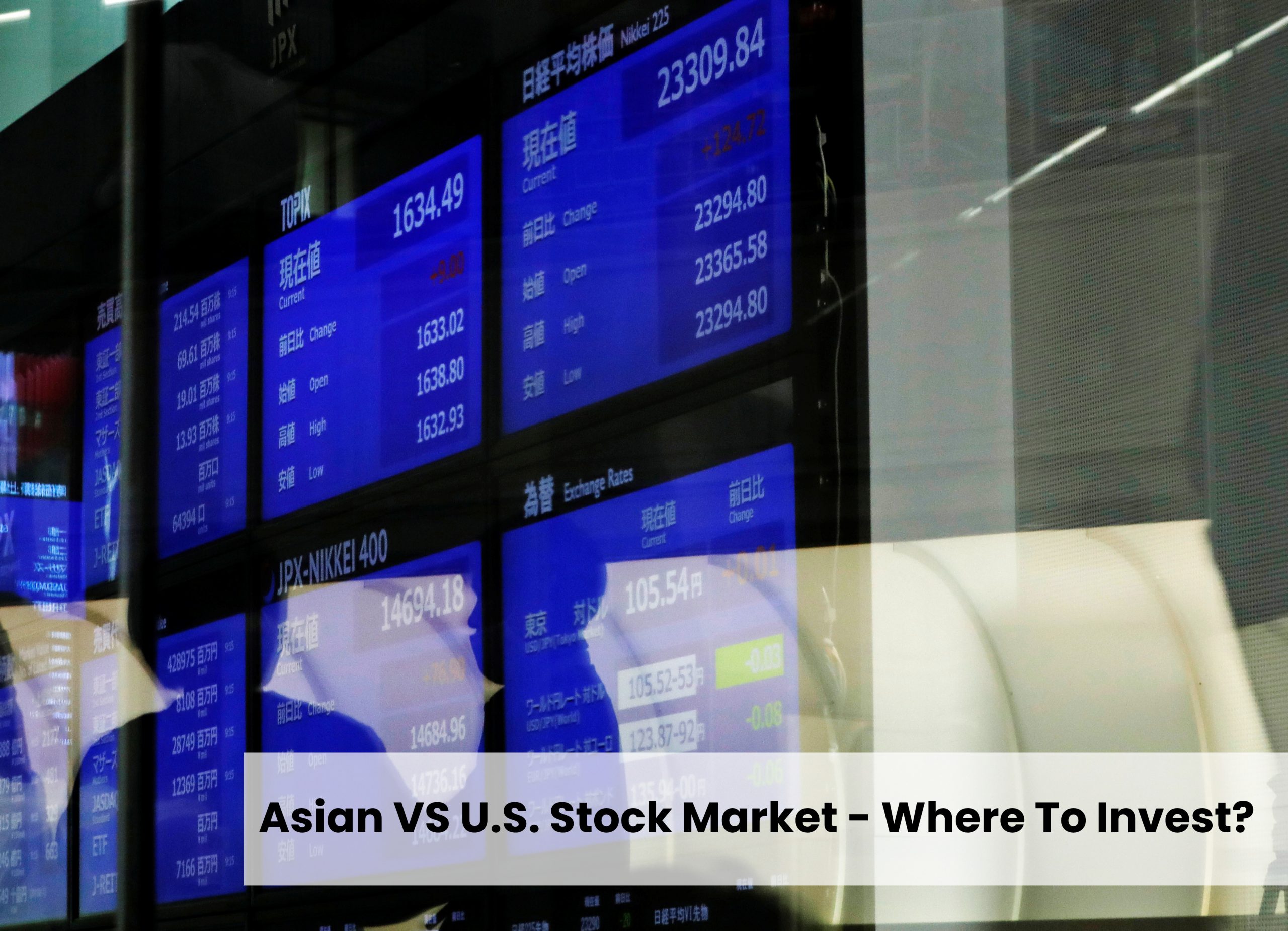 Asian VS U.S Stock Market – Asian and American equities are among the most popular on the market. Many individuals wonder where they should put their money and which stocks are best for them. Many individuals believe that US and Asian equities are more significant than other stocks as time passes. Furthermore, there are a number of elements that influence which stocks are superior and in demand in the market. One of the causes, among others, is an election.

Recent elections in the United States, as well as the resulting market instability, have increased demand for Asian equities. According to Eoin Murray, head of investing for international operations at Federated Hermes, “there is a greater than average likelihood that Asian equities will beat U.S. stocks over the next month.” It will be more evident in U.S. risk assets, and it will be more widespread worldwide, but with less force. ”

Asian VS U.S Stock Market- Stock market declines in the United States have been attributed to concerns about a disputed election and the choice by former President Donald Trump not to press for further stimulus before the election. Accordingly, Asian markets are expected to profit from a resurgence in the U.S. economy and trade flows.

In the past, there have been many instances like this. As a result, how is the current position in the modern stock market? Do you know which stocks are best to invest in: U.S. or Asian stocks?

Why Should You Invest in the U.S. Stocks?

When it comes to diversifying your portfolio across geographies, the US stock market is one of the top alternatives. Technology companies and other wealth-creating enterprises are located throughout the country, making it an excellent place to invest.

The RBI’s Liberalized Remittance Scheme, or LRS, allows you to participate in the US stock market. Under the program, every Indian citizen can send up to $250,000 per annum to the United States. If a family of four can send up to USD 1 million each year, that’s a lot of money! Investments such as best US companies stocks, real estate, and bank deposits, etc., as well as abroad costs like international travel and student education, are all included in this quota.

Your portfolio is more stable with geographic variety. Economies in industrialized nations tend to be less volatile in the long run than those in developing markets. It is possible to participate in a global growth narrative by investing in US stock market stocks. By investing in China’s largest retail company such as Alibaba, you become part of China’s economic progress. ETFs registered on the US market provide you exposure to a larger range of economies. In the case of the EWG ETF traded on the New York Stock Exchange, it invested in some of the top German firms.

Additionally, the US stock market offers the opportunity to invest in developing themes, which is not available in India at the moment. If you want to invest in India, you won’t find any large semiconductor or electric car manufacturers to choose from. Consider investing in Nvidia or Tesla instead.

Your Indian bank may also control over you an FX conversion fee or spread if you are sending money to invest in the United States. Depending on the bank, this fee might range from 0.5-2 percent of the amount sent.

Your investments in the US stock market are subject to two types of taxation. Tax rates for Indian residents are 25 percent due to a tax pact between India and the United States (deducted before distribution). Due to the Double Tax Avoidance Agreement between the US and India, the tax paid in the US can be claimed as a Foreign Tax Credit in your domestic filing.

Foreign capital gains are subject to taxation in India, though. This may be divided into two main groups:

In order to invest directly in US equities, you’ll need a US brokerage account.

There are several trading platforms that charge as much as $6.99 per trade, as well as hefty joining fees and annual maintenance costs, which can have a negative impact on the performance of your portfolio. Before signing up with a platform, one must be informed of these expenses.

Bank transfers are required in order to fund your brokerage account. Depending on your bank, there may be fees associated with the transfer and FX translation.

Due to repeated cash transfers and transactions, frequent trading may incur extra costs. Additionally, numerous remittances and currency conversion fees will be incurred.

Why Invest Money In Asian Stocks?

As a result of its diverse economies, demographic advantages, and structural changes, Asia is the world’s fastest-growing region, and it is now considerably more resilient due to its superior handling of the epidemic. E-commerce and fintech are also among the region’s most advanced areas, with its firms investing more in R&D than many developed counterparts, which could fuel future growth.

As a result, Asian assets are under-represented in investor portfolios despite their greater development potential. Due to the excellent earnings potential of firms and favorable valuations, Pictet Asset Management feels that trading Asian market stocks are appealing both for Asian and foreign investors. Good corporate profitability and declining currency and debt concerns in the area all contribute to a more favorable view for the region. Picture Asset Management continues to look for firms with excellent cash flow, earnings growth above the market, and appealing values in the current economic climate.

A JPMorgan strategist believes that the greatest moment to purchase Asian equities is now.

U.S. markets have reached record levels, while those in Europe and Japan are reaching their all-time highs, according to Mixo Das, Asia equities strategist at the bank. A different story is told on the Asian markets.

According to him, “after the February highs, we’ve been down quite a bit in Asian stocks, and our framework tells us that now is probably the ideal time to be taking chances in Asia.”

As of right now, investor positioning in Asia is “very, incredibly low,” while values have returned to more typical levels, according to Das. Stocks in the area might surge if the macroeconomic momentum in the region begins to normalize, he said.

Global corporate earnings are expected to increase by 60 to 70 percent from a year earlier in Asia’s second quarter, according to the analyst.

As a result of a spike in Covid-19 infections in parts of Asia, including South Korea, Indonesia, and Malaysia, progress on immunization is trailing behind nations such as the United States and the United Kingdom.

As a result, investors have gotten accustomed to seeing new Covid cases pop up. It was pointed out that the recent “disastrous wave” of illnesses in India did not affect the stock market because investors knew that India will likely maintain its long-term fundamental strength in the future.

A more transmissible delta form and low vaccination rates in Asia, however, might put a damper on equities that would gain from economic openings, according to Das’ analysis. He cited companies in the hotel, leisure, and travel industries as examples of such stocks.

JPMorgan likes equities that are sensitive to interest rate movements, such as banks, according to the strategist. As he made his remarks, the U.S. Federal Reserve increased its inflation expectations and accelerated the timetable for raising rates.

Although the pace of growth might decrease owing to increased regulatory scrutiny by Beijing, he emphasized that Chinese IT businesses still have growth prospects.

Beijing’s efforts to reign in monopolistic business practices and control the acquisition and use of data have dragged down shares of big Chinese internet companies such as Tencent.

“We’re getting queries from long-term, patient investors who want to know if this narrative will still be relevant in five, ten, or fifteen years. And mostly, the answer is yes.” Das Stated.

Morning trading on Thursday saw Asian markets hold on to some of their recent gains despite the Federal Reserve’s hawkish statements, which lifted the dollar while dampening risk appetite, and uncertainty about Chinese policies.

A wave of Chinese regulatory clampdowns in industries from property to education depressed Chinese equities and overshadowed the whole region.

Aside from Tencent (0700.HK), the Chinese stock market has been relatively stable this week, despite criticism of the gaming industry by official media.

Saxo Markets’ senior market analyst Edison Pun said that while the short-term bounce may continue, long-term investors would stay away from Chinese technology companies due to regulatory uncertainty.

Earlier this week, state media reported on the electronic cigarette industry, which Pun warned may potentially put an impact on associated firms.

A record high for the S&P 500 (.SPX) fell 0.46 percent from its previous closing. However, investors in the tech-heavy Nasdaq (.IXIC) gave more weight to favorable statistics from the services sector than to negative jobs figures, which resulted in a 0.92 percent decline for the blue-chip Dow (.DJI).

There are “mixed indications from the data,” according to Kyle Rodda, an analyst with the IG Group. Rodda said the Fed’s Vice Chair Richard Clarida’s remarks the night before had influenced the current developments.

As one of the main architects of Fed’s new approach to monetary policy, Clarida believes that the criteria for raising interest rates by the end of 2022 will have been satisfied.

Those comments boosted the currency and U.S. rates.

A technical modification to the underlying Ethereum blockchain is expected to occur later today, resulting in a 1.75 percent decrease for Ether, the world’s second-largest cryptocurrency.

In the previous week, Bitcoin has remained in the region of $40,000 and declined 1.3 percent.